The Main Square or Plaza de Armas is one of the most concurred public areas in Arequipa and place of foundation of the city.

Located in the historic center of Arequipa, around there is the Cathedral of Arequipa to the north, the portals to the east, south and west, the Church of the Company to the southeast, the church of Our Lady of Mercy to the southwest and in the center of the square a bronze fountain.

The cathedral of Arequipa was built in white ashlar (volcanic stone), with brick vaults; It is the main church of the city and it occupies the entire north side of the main square. 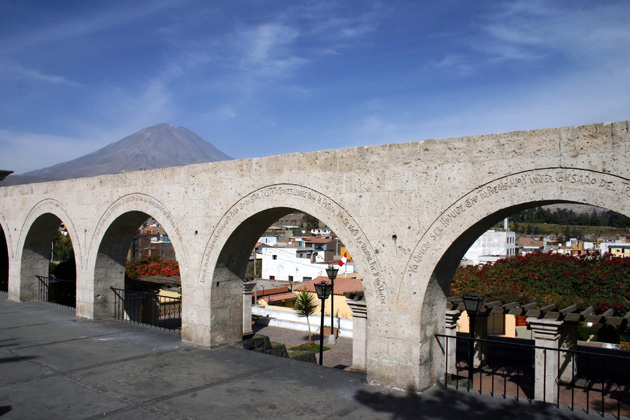 Located 2 km from downtown Arequipa, it was built in the 19th century and consists of a series of arcs of ashlar in which are recorded phrases from Arequipa’s most famous personalities. The place has a privileged view of the city and the Misti volcano.

Yanahuara, a district of Arequipa characterized by its picturesque stale and very narrow streets, houses with gardens and a church that dates back to 1750 located in the main square with a baroque facade. 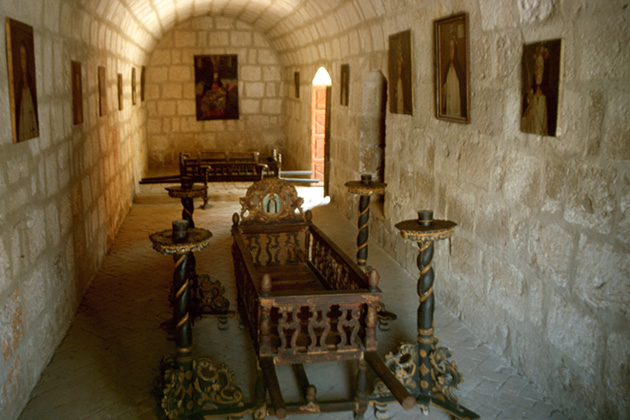 The Monastery of St. Catherine of Siena is a religious touristic complex located in the historic center of Arequipa.

Inside you can see the cloister of Sister Ana de los Angeles Monteagudo, who was beatified during the visit of John Paul II in 1985 due toher exemplary monastic life and the attribution of some miracles. 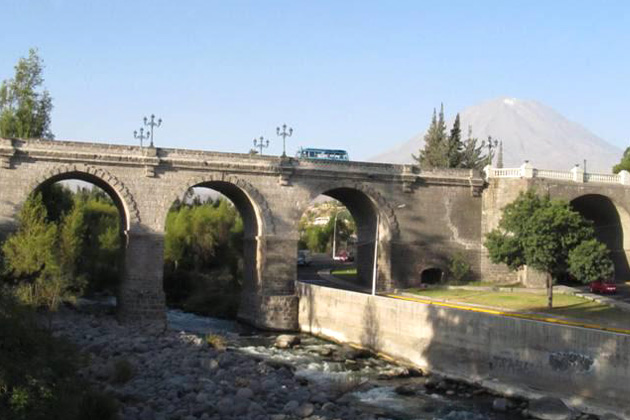 The Grau Bridge is a located in the city of Arequipa and crosses the River Chili.

The bridge was built in 1884 by architect Juan Rodriguez and Manuel H. Prado.

From the bridge you can see a magnificent landscape, facing Misti; to the left of the river it unfolds in a splendid panorama, dominated at the bottom by the Chachani volcano and on the other side, the districts Selva Alegre and Chilina. 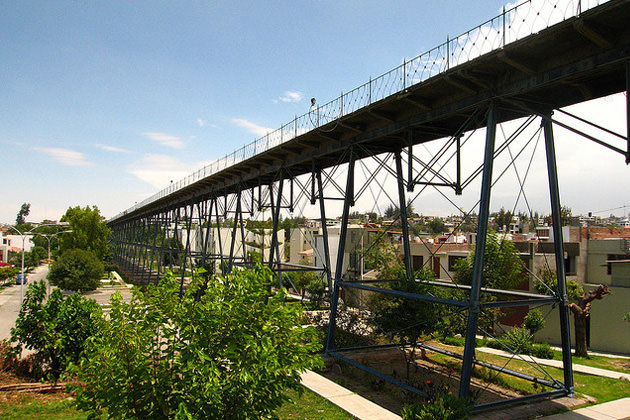 The Fierro or Bolivar Bridge 488 meters tall and crosses over the Chili River connecting the District of Sachaca, from the Arrayanes area with suburbs of the city of Arequipa on the Parra Avenue. Its construction was due to the construction of the railway network of the South (1868-1908).

The authorship of the construction of the bridge is attributed to the French engineer Gustave Eiffel, famous for the Eiffel Tower in Paris, but the structural system is an authorized enterprise patent from The Phoenix Iron Company. 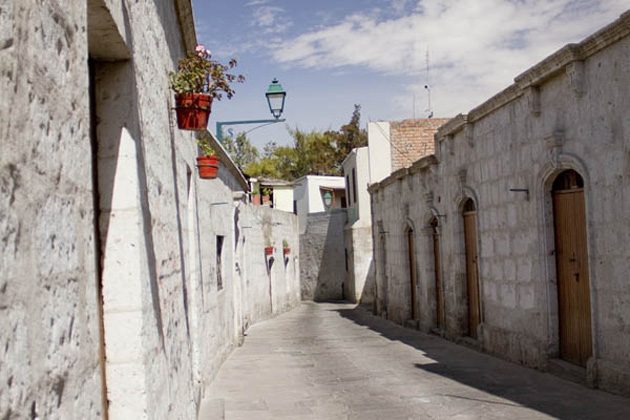 This old street is located five blocks from the Main Square of Arequipa, the oldest and most representative of the ancient White City.

In this place the Dominican priests were established in 1538, building a chapel for the evangelization of the natives of the area and prepare the land to found a new Spanish city. There is a small bridge that connects the Church of Saint Lazarus and its square with the rest of the neighborhood.

The creation of the Mario Vargas Llosa Regional Library System was due to the interest in strengthening regional education and culture. In a second stage, the project includes the construction of decentralized libraries. The construction of peripheral libraries respond to the need for knowledge and culture to all areas of the province of Arequipa. And in a third stage, the project objective is to enhance public libraries of the capitals of the provinces in the Arequipa region.

It was opened on March 22nd 2011 on the initiative of Dr. Juan Manuel Guillén Benavides, President of the Regional Government of Arequipa, with the presence of the writer and Nobel Prize winner in Literature 2010, Mario Vargas Llosa. 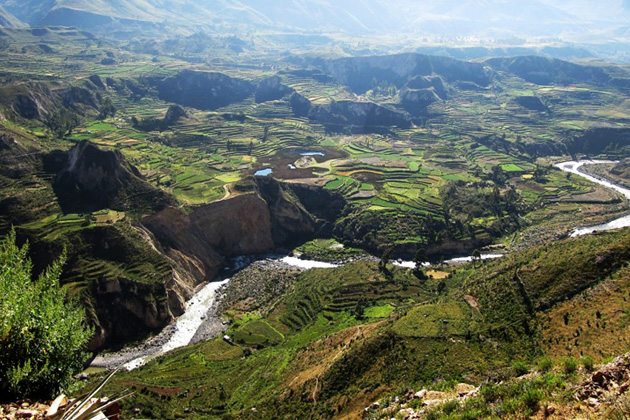 The Colca Canyon is located in the north-eastern end of the Arequipa Region, province of Caylloma, 165 km from Arequipa and 40km from Chivay main town and capital of the province of Caylloma . The highest point of the valley is the inactive volcano Ampato (6288 meters) and the lowest the confluence of the Colca and Andamayo (970 m) rivers.

The Colca Valley has an extension of 100 km in length and occupies only a sector of the basin of the Colca River, between the districts of Callalli and Huambo. The Colca Canyon path runs along the skirts of Chachani and crosses plains full of ichu and yareta, samples of Andean vegetation. Also alpacas and vizchas live around this area, which are beautiful native camelids. 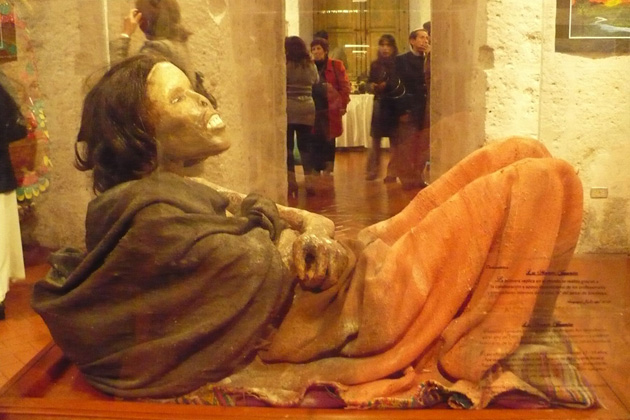 The Andean Sanctuaries Museum was established in 1996, as a result of the important archaeological investigations carried out by the project “Sanctuaries of height of the South Andean”, directed by the doctors Johan Reinhard and José Antonio Chávez.

The Sanctuaries Museum houses the frozen body of the Mummy Juanita and various items. It is designed to become an Institute of Scientific Research and Social Projection.

The Cotahuasi canyon known as “The Cannon Wonderland” or the Cotahuasi Sub-basin is located approximately 400 km northwest of the city of Arequipa, in Peru.

It is the deepest of America (3535 meters deep), in the Ninancocha sector; its measurement was made in 1995 by members of the nonprofit Association “Nanin Runas Peru” and at the same time by students of the Faculty of Geographical and Environmental Engineering at the Universidad Nacional Federico Villarreal.